This article is part of: Wasting Away behind Bars 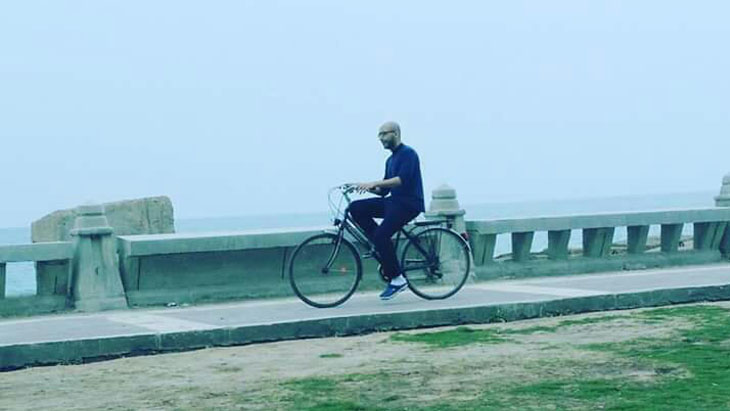 After spending time behind bars, newly released inmates find it difficult to re-adjust to life on the outside.

“I was dumbfounded. I felt an unnatural numbness in my feet that made me unable to move. I did not know if it all happened as a result of the unexpected happy surprise or because of the prolonged stay within the 4 by 10 space inside the prison.”

These were Mohammed Hosni’s first thoughts when he walked out to freedom after he, along with 18 other prisoners, were released by an unexpected presidential amnesty. They had spent a year behind bars in the case known to the media as ‘Shura Council Incidents’.

When he was released from Tora Prison, south of Cairo, Hosni’s eyes fell on an old friend, who happened by chance to know about his release. That friend was activist Ranwa Yousuf, who was stunned to see Hosni in his miserable state and had to yank both of his hands to force him out of the prison gate.

His case started in November 2013 during a peaceful sit-in in front of the Shura Council premises during the 50-member constituent assembly session to protest a constitutional article allowing civilians to be trialed in military courts. Force was used to disperse the protestors. He had been arrested and sentenced to 15 years in prison.

Hosni’s sentence was later reduced to three years by the Court of Appeal for some convicts. An amnesty decision was later issued unexpectedly for some of them after spending one year in prison. According to Hosni, the cell gate was opened beyond the normal time and the names of those who were to be released were read aloud. They were told to proceed toward the street without any additional procedures or routine complexities.

The day he was released from prison was the beginning of Hosni’s phobia of large spaces. The first time he experienced his phobia was immediately after his release, when he went out with his son Muhanad during Eid.

“It was as though I had forgotten how to walk in traffic. I had to wait a few minutes until a man helped me cross the busy street in Shubra district.” It happened several times again until he finally decided to re-teach himself how to cross the street on his own.

Other strange things began to happen after Hosni’s release. He had difficulty remembering the names of most of his friends and acquaintances. He also experienced trouble sleeping, he kept changing mattresses frequently, thinking that the problem lay in the type of mattress he used.

He taught himself how to sleep again by folding a few blankets in a certain way and placed them on the floor. He switched between sleeping on the floor and the bed until he overcame the problem and returned to his normal sleeping habits.

Hosni recalls that he had been so absorbed in the minute details of life in prison to avoid thinking emotionally about his life as a prisoner. “It was a parallel world with all its rules, habits and inmates.”

Hosni, approaching his forties, did not hide his serious thoughts of committing suicide after his release. “The only thing that kept me from doing it was thinking about the fate of my children.” He consulted a psychiatrist, who happened to be an old friend living abroad. Hosni contacted him via the internet and got needed counseling.

He plunged into a state of depression when he was confronted by the fast-moving political and economic developments in Egypt that happened while he was locked up. He was traumatized when he discovered after his release that most of his friends and acquaintances had been found guilty of political offenses and that he himself was still living in an alien environment outside of prison.

He also had a strong desire for solitude, having lost of privacy in every aspect of his life: changing his clothes in public, checking his personal effects, and the prisoners’ queue in front of the prison lavatory.

Besides his hobby as a freelance photographer, Hosni owns a software company, which he tried to start running again after his release from prison. That created a new psychological pressure, making it harder to deal with people, especially his customers. “I was nervous and unable to bear with pointless negotiations. I felt guilty for being impatient with my staff, not to mention the hardships I put them through during my imprisonment.”

To cope with his new life as a free man, Hosni started travelling on exploratory photography trips inside and outside Egypt like in Siwa Oasis, east of Egypt, the Red Sea town of Dahab, and Lebanon.

Despite three years and three months in prison, political activist Loay El-Kahwagi still manages to have a bright and confident smile and a jovial nature, even if his nickname “ill-omened Luka” suggests someone else. His sentence ended last March after completing his penalty for two political cases.

El-Kahwagi and a number of other activists were sentenced in January 2014 to two years in prison and a fine of EGP 50,000 (US $2,800) on charges of violating the protest law. The second case, which was moved against him while in prison, belonged to the era of the removed president Mohamed Morsi during the popular protest sit-ins against the Islamist rule. Nevertheless, the Sissi’s government sentenced El-Kahwagi along with a number of other activists to one year and three months for a “crime” committed under the watch of the Islamist government ousted by Sissi’s coup.

One of unpleasant ironies for El-Kahwagi’s imprisonment experience, which he spent in Burg El-Arab prison in Alexandria, was being sent to the Islamists’ cell, where Muslim Brotherhood members, ‘Takfiris’ and others from political Islamic movements were locked up. The first few months came as an extremely disturbing experience and it was very difficult to get adjusted to staying with those inmates.

“They nicknamed me ‘ the communist,’ not because of political reasons but because of my preoccupation with reading, in addition to having different daily habits.”

Over time, the reading habit developed into a good communication tool with the prison inmates, after he had built his own library in prison and set a loan system for those interested in borrowing books. Over time, El-Kahwagi turned from an enemy to a person with another opinion.

Contrary to Mohammed Hosni’s perception about prison as a fait accompli and his absorption with his imprisonment details, the Alexandria activist opted to take his presence in prison as a temporary stay, with his mind always busy outside prison walls.

Visits, letters and inquires about his friends’ news as well as his attempt to help them solve their problems were the essential communications means with the outside world, which made him more cognizant of his influence and coexistence with them.

El-Kahwagi believes that prison helped him strengthen the emotional bond with his close friends. His release marked a joyful and pleasant occasion to be reunited with loved ones after a long absence. It also helped him shake off what he called ‘ the inhibitions’ caused by the prison’s environment and mixing with the Islamic activists.

Wearing a blue prison uniform, he borrowed the bike of a friend who met him outside the prison, and headed to Alexandria’ seashore on the dawn of Friday, March 10. Afterwards, he went to a welcome party arranged by his friends, where he danced and enjoyed his time the whole day.

Looking for an effective role

El-Kahwagi was nearly 27 years old when he was sent to prison for the first time and was set free two months ahead of his 30th birthday. He feels especially gloomy about the constraints facing the youth in Egypt, in comparison to the time preceding his imprisonment.

He explains that the years he spent behind bars were not as painful as the past years since his graduation from the Department of Geography in Alexandria University where he could not put his feet on solid ground, he said.

“I started to feel dejected, months after I walked out to freedom and a new life, particularly the feeling of being outside of the norm and a loss of concentration. I also feel a sense of uselessness.”

While he does not rule out the idea of seeking psychological counseling or support if necessary, El-Kahwagi believes his problems will end as soon as he puts his feet on solid ground towards a successful professional future.