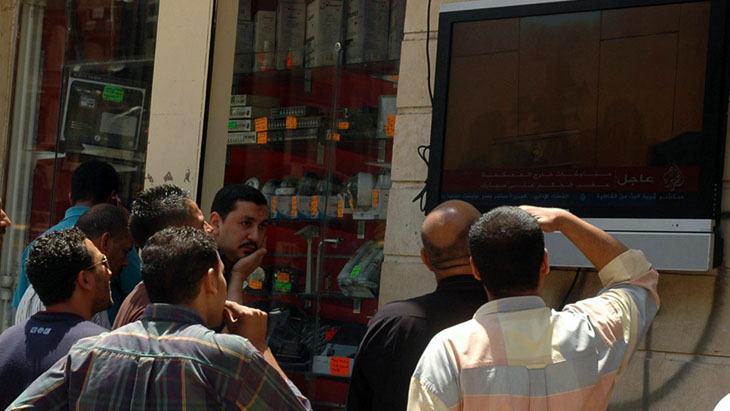 Despite a flurry of criticism leveled at Morsi for failing to prevent initial construction on Ethiopia’s Renaissance Dam, the Egyptian media seem to have forgotten the qualms with their own politicians and their neighbors’ over River Nile quotas.

One of the largest bones of contention between neighbors Ethiopia and Egypt in recent years has been the former’s dam construction on the shared waters of the River Nile.

Egypt maintains that Ethiopia has reneged on an agreement signed during the British colonial era by the Nile Basin countries in 1929, which determined Egypt’s quota of the Nile water and gave it the right to object to projects affecting this quota by other signatories on the river or its tributaries.

The Ethiopian government, assisted by the US State Department, conducted a comprehensive survey of the Blue Nile, one of the Nile tributaries, to determine the final site for that country’s marquee new water infrastructure project, the Grand Ethiopian Renaissance Dam (GERD) in 2010 and began construction soon after.

Ethiopia reportedly did not make recourse to the Egyptian government during the consultation process, ignoring international guidelines for projects on shared waters, arguing that the existing agreements  were signed during the colonial era and therefore illegitimate.

A design for GERD, formerly known as the Millennium Dam, was completed in 2010. In 2011,  former Ethiopian Prime Minister Meles Zenawi laid the foundation stone for the 175 meters-tall dam. The 16 power-generation turbines are designed to generate enough electricity to cover Ethiopia’s needs and still create a surplus for export.

Fears over the Renaissance Dam first surfaced in 2013 during the Muslim Brotherhood’s most recent reign. Mohamed Morsi tried to quell citizens’ fears stating that the Ethiopian head of state had assured him, during the African Summit in Addis Ababa, that Egypt’s quota of Nile waters would not be affected.

Morsi’s counterpart reportedly held up a glass of water and told Morsi that Egypt would not lose less than the water in the glass. The ever-alert private media spared no effort to slam what they perceived as Morsi’s naivety. Its reaction ranged from criticism to outright sarcasm.

One pro-Mubarak and Emirati-backed TV anchor taunted: “The great river is overwhelmed by a waft of painful feeling and waves of bitter panic.”  TV anchor Jaber al-Qarmouty on ON TV asked how the president could say Ethiopians were brethren while being “screwed so badly by them over the construction of the Renaissance Dam”.

“If our land is thirsty, we will quench her thirst with our blood,” said another journalist, citing a famous scene from Chahine’s 1970s film The Earth. Journalist Amro Adib focused on the actual reduction in Egypt’s share of the river: “Egypt will lose 12 billion cubic meters of water of its annual quota every year!”

Most Egyptian TV channels and newspapers were quick to slam the secret national congress to which Morsi invited a number of public figures to discuss the water issue. Although that meeting was meant to have been held behind closed doors, it was somehow broadcast live. No one, including the president himself, was aware of the live transmission. The conferees presented many funny suggestions, like sending actors and football players to discuss the issue with top Ethiopian officials. The incident helped contribute to Morsi’s eventual downfall.

Only a few hours before the inauguration of the first phase of Renaissance Dam, the same journalists who had cried and wailed when construction on the dam started during Morsi’s presidency, like Amro Adib and Qarmouty, had now fallen silent. Media reaction to Ethiopia’s Renaissance Dam has drastically changed since Mohamed Morsi’s times.

Egypt’s media map today is divided into two camps: official government media and a pro-regime private media. They all have apparently agreed to ignore what is happening around them, as though the former political leadership was fully responsible for this problem, while the present one is by necessity not responsible, because nothing is basically happening.

Crying in the Wilderness!

Despite repeated warnings, official and private media alike remain inattentive and have not really covered the dam’s developments. Professor of Agricultural Economics Dr. Gamal Siam warns that the issue is disastrously dangerous, given that the dam construction has been completed.

Dr Siam added that Ethiopia’s persistent decision to fill the dam within a short time will cause Egypt to face the specter of water paucity and the immediate harms of losing large areas of agricultural land, with serious potential consequences on Egypt’s food security.