This article is part of: Mixed Marriages 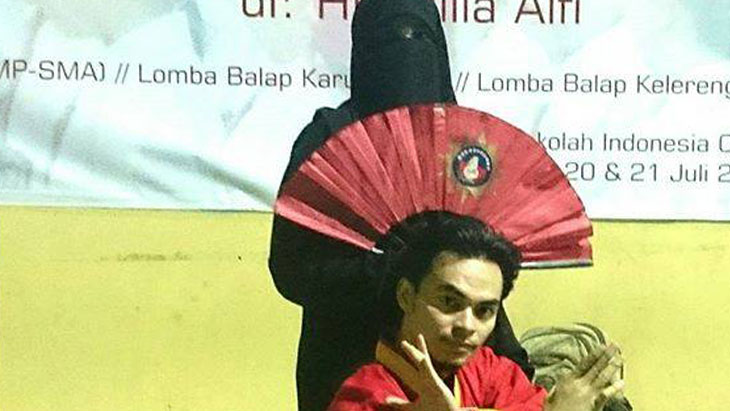 How a persistent Indonesian man finally managed to gain the acceptance of the family of his Egyptian bride.

“To pursue our religious studies, Indonesians have three options: Kurdistan, Sudan or Egypt,” says Rooney Irawan a 30-year-old Indonesian. Encouraged by one of his friends studying at Al-Azhar, Irawan moved to Cairo, as he had already learned Arabic while studying at a religious school in Indonesia. He found a job as a trainer of Pencak Silat, a self-defense art, at the Indonesian Cultural Center in Cairo. That job would change his future.

Nada Hussein was teaching the Quran at a mosque in the Haram district in the Giza Governorate when she was looking for a sport that taught self-defense. A friend mentioned the Pencak Silat at the Indonesian Cultural Center. “There was a female trainer and a separate female team which was a rare occurrence. She taught us how to improve our physical fitness which encouraged me to exercise and go to the center,” she recalled.

However, the female trainer was replaced with a male one. He was wearing a red loose gown and a blue belt.

“The first time I saw Nada, I had a different feeling. Something about her attracted me. At first, I did not know what it was. I was impressed with her performance and the fact that she had background in the game. After that, I had the feeling that I had known her for a long time and started to consider proposing to her,” remembers Irawan.

His story with Nada was not his first emotional experience. “I had already got engaged to an Indonesian girl for six months but we had different views so we broke up,” says Irawan.

Irawan decided to propose to Nada but before he told his mother. “Crying was her sole reply as I would be estranged from her.”

Irawan says that one of Sumatra’s customs is that the husband lives in his wife’s house for a year. “When I reached marriage age, (22-25 years old in western Sumatra), my mother told me that my wife should be from western Sumatra. The distance between Sumatra, in far western Indonesia, and Jakarta is about 1,280 km. My father died when I was in my final year at school. Therefore, my mother was waiting for me to get married and live with her. That is why when I told her I was planning to marry an Egyptian girl, she cried and did not reply.” Luckily, Irwan’s brother intervened on his behalf and Irwan’s mother accepted.

Nada’s family was another, much bigger hurdle.

She was surprised when her trainer asked for her father’s phone number. “My father returned home and we understood what Irawan wanted. At first, my mother rejected and said: ‘His proposal is rejected anyway, why should he bother coming over?’ I tried to convince her, saying that he is my trainer and I just wanted him to come as he asked to visit us. I told them to receive him and then reject his proposal. My mother was more against it than my father,” says Nada.

Irawan took an Egyptian friend with him. “I wanted a person who understands local customs and traditions,” he recalls.

“On the way to Nada’s home, my friend kept saying that our proposal would be rejected. My friend spoke and I remained silent during the entire visit. Her father answered that he would like to consult with his family which was pretty logical,” says Irawan

Nada was watching what was happening from behind a curtain. “My father’s reaction was fairly normal given the Egyptian culture but my mother said to Irawan: “So you want to take my daughter away from us?”

Having the same religion was not a good enough reason for Nada’s parents to accept Irawan’s proposal, which they rejected a week later. However, Nada’s father did tell Irawana’s friend why: “My proposal was rejected because I am Indonesian. But I am a Muslim,” says Irawan.

Nada believes that her parents had their own good reasons. “I am the eldest of my siblings and the family’s center. It is difficult for my parents to let me go. They believed that he is from a distant country and they did not want to be estranged from their daughter. They thought he would take me to his country,” she explained.

“If you want me, I will do everything I can but if not, I cannot do anything,” says Irawan.

After the third visit to Nada’s father, her parents finally agreed and Nada’s mother became Irawan’s biggest supporter. Her father agreed to their engagement after setting conditions. One of them was that Irawan buy a flat in Egypt to ensure my life in Egypt,” says Nada.

Nada’s and Irawan’s engagement was full of Egyptian details including Nada’s dress and the decorations, which was the Indonesian Cultural Center in Cairo. “We held our engagement in the center after getting the embassy’s approval. Irawan wore a modern suit and in the final hour, we wore Indonesian costumes and performed some improvised Pencak Silat moves. The shows were purely Indonesian,” she added with a smile on her face.

Nada and Irawan postponed signing the marriage contract until their wedding, which was held near Nada’s parents’ house in the Haram neighborhood. “The place was divided into two sections: the hall was designated for women and the hall’s garden for men. I wore an Egyptian wedding dress and the whole wedding was Egyptian. In the garden, the Egyptian and Indonesian trainers presented many shows, including Pencak Silat ones. The groom wore a normal suit,” she reminisced.

Irawan also had his conditions. “My request is that I take Nada and live with my mother in Indonesia for four years.” Nada’s mother worried that her daughter would leave them but she later accepted the idea of visiting Egypt every now and then. Irawan and Nada will travel to Indonesia after Nada finishes her studies.

Irawan speaks colloquial Egyptian Arabic mixed with some formal Arabic, and Nada started to learn the Indonesian language. The couple live in a rented flat in the Zahraa District in Nasr city.

They are expecting their first baby. Irawan would like to name him Ahmed so that people call him Abu Ahmed and if it is a girl, he will name her Aisha. Nada prefers Mo’tasem. In general, the Indonesian husband would like to give his expected child an Arabic name. The names in Indonesia are either Arabic or Asian Indonesian ones.