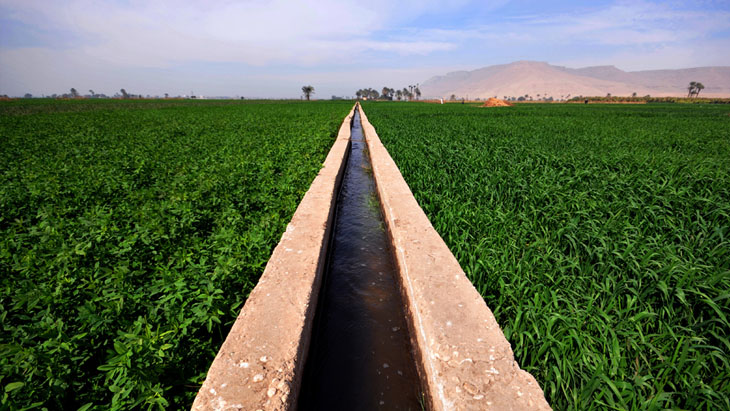 Within five years, the Red Sea Governorate will depend entirely on desalinated sea water. Will other governorates follow suit?

This was before Ethiopia announced that it would start using the Nile water to operate the Grand Ethiopian Renaissance Dam (GERD) at the beginning of July 2017.  Egypt is therefore looking to offshoot demand by desalinating sea water to make up for the Nile waters lost to Ethiopia’s dam in the south.

Saudi Arabia relies on desalinating sea water to meet 70 percent of its population’s water needs with an annual production of more than 1 billion m3. That makes it the world’s largest producer of desalinated water. Qatar and Kuwait also meet 100% of their water needs through desalination.

Mohamed Hamdan, former secretary of the El Qseir in the Red Sea Governorate, waits for the Nile water coming from Qena Governorate once a week to source his household drinking water needs.

The governorate, located along the Red Sea, has 13 desalination stations. yet most of the 400,000 inhabitants refuse to drink desalinated water. They prefer instead to wait for the Nile water which comes through two pipelines: Al-Kareemat (80,000 m3/day) and Qena (14,000 m3/day).

There are no direct water connections to homes in the Red Sea Governorate. Residents entirely depend on storing water in cisterns located on the rooftops, which are then filled twice or thrice a week based on the schedule of each city or neighborhood.

The Nile water pipelines do not reach all cities in this governorate. Marsa Alam, Hala’ib and Shalateen receive their share of water through water-distribution cars. Yet if the government’s policy is successful, locla residents will soon have to adapt to the desalinated water.

Eng. Yehya Sadeek, head of the board of directors of the Water and Sanitation Authority in the Red Sea Governorate, says that there was a political will before the rise of Ethiopia’s Renaissance Dam to desalinate sea water in the coastal governorates and cities. Sadeek says that in the future the Red Sea Governorate will entirely depend on desalinated sea water and abandon the use of pipelines to transfer Nile water.

“Within five years the governorate will depend entirely on desalinated sea water,” said Sadeek.  replacing the Pipelines transferring the Nile water have therefore not been replaced or maintenance has been suspended.

Abeer Hussein, PR Director at the governorate Water and Sanitation Authority, says that there are 13 desalination stations in the governorate, producing 26,000 m3 of water. The Yusr Desalination Station in Hurghada is yet to be operated. Its daily high capacity is expected to reach 80,000 m3.

Yaser Khalil, a resident from the south of governorate, told Correspondents that at first all residents refused to drink the desalinated water due to its strange taste and high saline content. Khalil says the problem was actually in the pipes themselves and that after they were replaced the quality of the water improved.

The Yusr Station, which cost L.E. 750 million, is the largest desalination plant in Africa. Its production, at full capacity, will meet Hurghada’s needs and what remains will be distributed to other cities.

Ahmed Abdullah, the Governor of the Red Sea Governorate, says the station is at the final stages, indicating that it is now under trial. Drawing sea water at the station started in mid-May 2017. It is planned to be opened in the few coming weeks.

He added that the station is the second one in Egypt which applies the Calcite Filtration System and the carbon dioxide injection to treat water according to the standards of the Ministry of Health and the World Health Organization to ensure water quality and meet the water needs of people and the investment projects especially the tourist ones and to keep up with ongoing urban development.